“In Their Words”: Sheante B. shares her journey with Major Depressive Disorder (MDD)

You know the images of birds and sea animals stuck in oil after a spill? When I was depressed, I could relate to how I imagine those creatures must feel: hopeless, helpless and on the verge of drowning. That was a dark time for me. 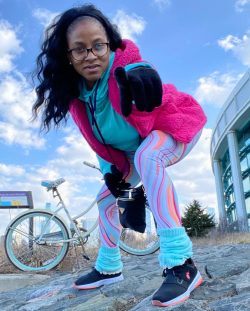 Today, however, I feel like I’ve been lifted out of the water. I am enjoying being a mother of three and a grandmother of five. As a former Chicago Bulls cheerleader, I am now pursuing my dreams of studying to be a fitness and aerobics instructor and nutritionist. I want to teach and help others how to use physical movement to express their feelings – and heal themselves.

It was a struggle to get here, but I am so glad I’ve reached this point in my journey.

I dealt with depression for several years, but in 2017 with the death of my mom triggered the onset of a Major Depressive Disorder (MDD) episode. Leading up to that, I had gone through a lot of intense things leading up to my breaking point. I was working several stressful jobs and was also in the middle of moving. After she was diagnosed with cancer, my mom was told she would have three to five years to live. Of course, we were hopeful she would beat it. But unfortunately, it was too aggressive, and she didn’t make it to year three. After she passed, everything became dark for me. It was just too much for me to handle.

At first, I did not fully understand what was going on with me. I often felt numb yet and my insides felt like loose wires. It was the strangest feeling because it was as if I had no control over my body. I struggled to function each day, and it was hard to get out of bed in the morning, brush my teeth or even shower – none of that mattered. I could barely go to work. Depression played tricks on my mind. I kept to myself and stayed away from my friends and family and appeared standoffish, which had never been my personality.

As I experienced all these symptoms, people who loved me were trying to softly make me aware that I needed to see a doctor. I resisted at first, but then I started having anxiety attacks that became worse over time. My friend urged me to finally see a therapist and get help. What I want to share is this: it gets better. My middle son is proof that I am doing ok now. He has always been my caretaker. When I was going through tough times and did not want to get out of bed, he would make me breakfast. For a long time, he assured me that he would never leave me. But this past December, he told me he wanted to move to Arizona by himself. That is how I knew I was doing well. He recognized – and so did I – that I would be okay without him.

For those struggling with depression, remember that your journey can be a lengthy process, at least it was for me. Getting help was important for me because it allowed me to let my guard down. Stay positive and seek out that help. Do not give up.

If you or someone you know may be struggling or in a crisis, please call the toll-free lifeline at 800-273-TALK (8255). For additional resources and support, visit the National Alliance on Mental Illness. The State of Depression in the U.S.
LEARN MORE You are now leaving Sagerx.com and entering a website that is not owned or controlled by Sage Therapeutics, Inc.